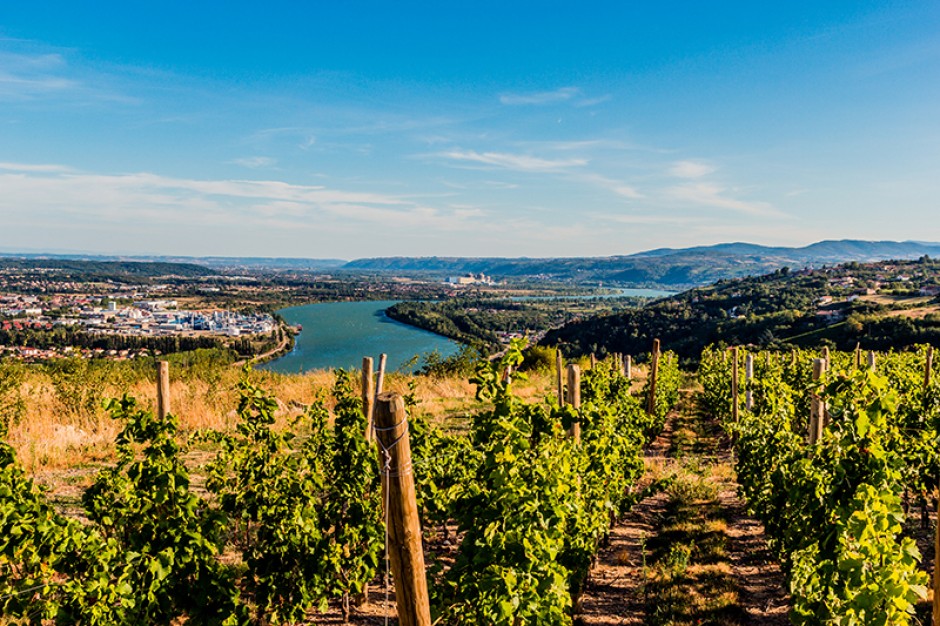 Arguably the third major wine region in France – behind Bordeaux and Burgundy – the Rhône Valley is considered actually two very individual wine regions. It is a historic wine territory and has been for thousands of years. Within these years came many shifts and shocks for this complex and storied wine region.

Sculpted by a glacier in the last ice age, the Rhône Valley revels in a unique geographical make up that is influential and discernible in the variety of its resulting wines. The Rhône Valley is located in the East of France following the river valley between the cities of Lyon and Avignon, with the towns of Valence and Montelimar separating the two wine-regions. Vineyards thrive on both sides of the eponymous river which divides the two sub-regions of Northern Rhône and Southern Rhône. They are distinctly different from each other in almost every way - climate, soil, terrain and grape varietals grown - which results in very different wine production.

So what makes the Rhône Valley so appealing to wine lovers? The immediate noticeable difference is the focus on the dominant grape varieties: in the north, Syrah is the favoured grape; while in the south, Grenache takes much more precedence.  Both grapes are known for their ability to produce big, full bodied and very age-worthy wines with lots of fruit character.

The Northern Rhône is a simple 40 miles long and is responsible for a small 4-5% of all wines from the entire region. For wine producers, small is beautiful and the wines of Northern Rhône have become a byword for quality and prestige. The small production in Northern Rhône focuses on fine wine, with winemakers having a more intimate relationship with their vines. Hermitage is possibly the most iconic appellation in the Northern Rhone; frequently 100% Syrah, though small proportions of Marsanne and Roussane (both white grapes) are permitted in the blend.  Other notable appellations include Cote Rotie (Syrah-Viognier blends), Condrieu (white wine, 100% Viognier), St.Joseph and Cornas.

Northern Rhône is characterised by its cooler temperatures, increase rainfall and steep hillside terrain in comparison to the warmer and much flatter Southern Rhône. The Southern Rhône is a sprawling wine region with vines covering over 70,000 hectares of land. Of course with an area this immense, sweeping statements prove difficult as you can find a diverse wide range of terroirs, micro climates and wine styles in a region which is home to over 25 different varietals. The wines of Southern Rhône are described as some of the most versatile and friendly in all of France thanks to their fruit-forward and approachable characteristics which make it a great region of discovery for French wine novices.

Chateauneuf-Du-Pape is unquestionably the most iconic appellation of the Southern Rhône; Grenache dominant, Syrah and Mourvedre play supporting roles with a total of 18 individual varieties (black and white grapes) permitted within the overall blend.  Other notable appellations include Gigondas, Vacqueyras, Rasteau and Ventoux.

White wines are also produced in both the Northern and Southern Rhône valleys, though these contribute only about 5% of total regional yield; Viognier, Marsanne, Roussanne and Grenache Blanc are the most frequently used grape varieties.

The regional appellations of Cotes-Du-Rhône (Hills of Rhone) and Cotes-Du-Rhône-Villages are in theory produced in both the Northern and Southern Valleys, though in practice are more often found from estates in the south.  Grenache and Syrah are about equally favoured for this style.  While not necessarily considered an ageing-wine, Cotes-Du-Rhônes can represent some of the best value wines for everyday drinking.

Key producers in the Northern Rhône include Guigal, Jaboulet, Delas and St Cosme; from the Southern Rhône, iconic producers include Beaucastel, Rayas and Vieux Telegraph.

Home to two compelling winescapes, the Rhône Valley has established itself as a major competitor on the world stage thanks to its ability to showcase a real sense of place in its full-flavoured wines. An increased thirst for Rhône and it's ruby-red magic has led to increased interest over the past few years with Liv-Ex's recent 2021 publishings showing their wines are now performing better than some other regions.