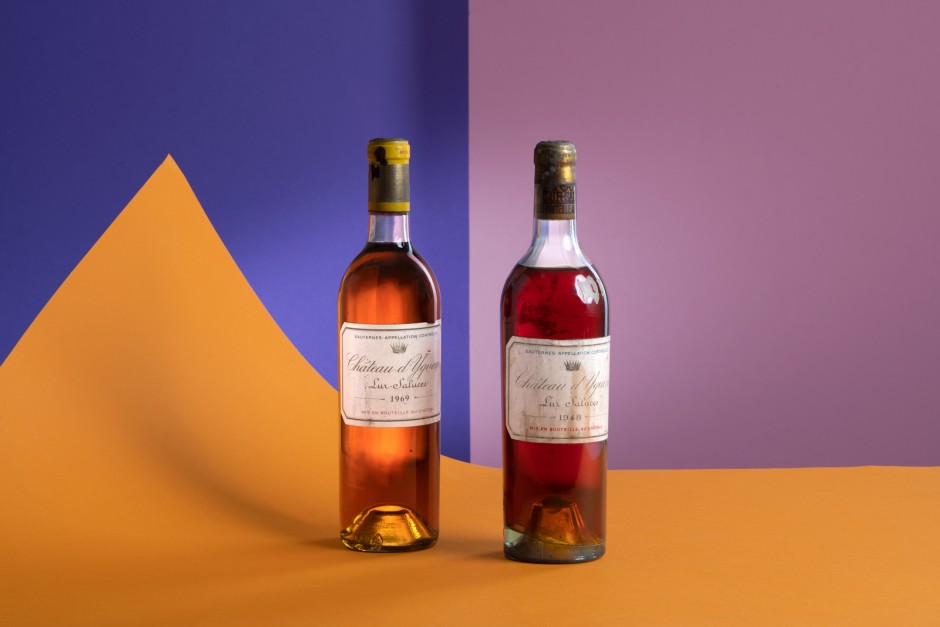 When it comes to Sauternes wine there is no name that can boast such widespread salience than Château D’Yquem.

Located in the Sauternes region, in the south of Bordeaux, Château D’Yquem is the only First Growth classified as a 1er Cru Supérieur Classé in the 1855 Classification of Sauternes-Barsac; exceptionally sought-after, this magnificent sweet wine is revered for its superiority.

Dominating the area from the top of the highest peak in Sauternes, Château D’Yquem enjoys an outstanding micro-climate that allows incredible growing conditions for the grapes. The balance of a warm and dry topsoil, ensuring heat is preserved, and clay-based subsoil supplying stable water reserves is ideal. The high elevation of the terroir also ensures that winds remove excessive moisture from the vines and provides excellent drainage. Most importantly, these favourable characteristics facilitate the phenomenon of Botrytisation. Botrytis Cinerea, also known as noble rot, is a unique fungus that attacks the grape, concentrating their sugar levels. Botrytis-affected grapes produce very special and sought-after qualities that give Sauternes wines their magical sweetness and iconic character.

Château D’Yquem has a longstanding history that traces back to 1593, when local nobleman Jacques de Sauvages was granted feudal tenure of Yquem from the French monarchy. Château D’Yquem soon developed a remarkable reputation, with their wines recognised as some of the best white wine expressions in France, attracting people from all over Europe. While the process was different to how Château D’Yquem wine is made today, it is believed that the château had been experimenting with noble rot since 1666. Production and expertise advanced over the years and their wines quickly attracted fame and recognition. The Chateau was acquired in 1999 by the LVMH group, who are the current owners.

"There is no other wine in the world like it, and there is no other luxury wine that can possibly justify its price as much as Yquem. The remarkable amount of painstaking labor necessary to produce the nectar known as Yquem is almost impossible to comprehend."

Château D’Yquem’s vineyards amount to 113 hectares and are planted with just two grape varietals: 80% Semillon and 20% Sauvignon Blanc. Semillon is susceptible to botrytis and develops sweet and intense characters, while Sauvignon Blanc’s freshness and crispness balance the sweetness of their wines. Recognised as one of the world’s greatest sweet wines, it is no surprise that everything from grape growing to harvesting, pressing and maturing is based on a meticulous approach that ensures perfection in every bottle. In addition to their flagship Yquem sweet wine, the château produces ‘Y’, a dry Bordeaux white wine made predominantly from ripe Sauvignon Blanc grapes harvested at the beginning of the vintage. A number of very ripe Semillon bunches are also selected just at the beginning of the Botrytisation process.

At Château D’Yquem, organic fertiliser is used sporadically so not to spoil the terroir, and grapes are hand-picked and carefully selected to ensure that the Botrytis produces the desired effect. This labour-intense process is highly time consuming and fastidious, with each vine only producing one glass of wine! After harvest, the carefully selected grapes are pressed three times and matured in oak barrels with a production of 65,000 bottles per year. Cellarmaster Sandrine Garbay’s incredible care and expertise are central to determine the complex character of the wine, however, the process is highly influenced by external factors. To maintain consistency in their wines excellence, if the ideal conditions for grape growth aren’t met, no wine is produced for the year.

Château D’Yquem wines are renowned for their unique ability to age for what seems an eternity -  some astonishing expressions have recorded a life span of a hundred years. While these wines can also be consumed young, the ageing process is what enhances Château D’Yquem's real identity and allows the development of a full and rich character.

The outstanding work behind every bottle and its resultant quality reflect the wines high value. In 2011, Château D’Yquem set the record for most expensive white wine commercially available with a remarkable 1811 vintage sold for £75,000 by a London-based rare wine specialist to the French collector Christian Vanneque.

Château D’Yquem is the symbol of winemaking excellence and craft, presenting the brightest stars in the world of fine wine and a golden addition to any wine lover’s collection.