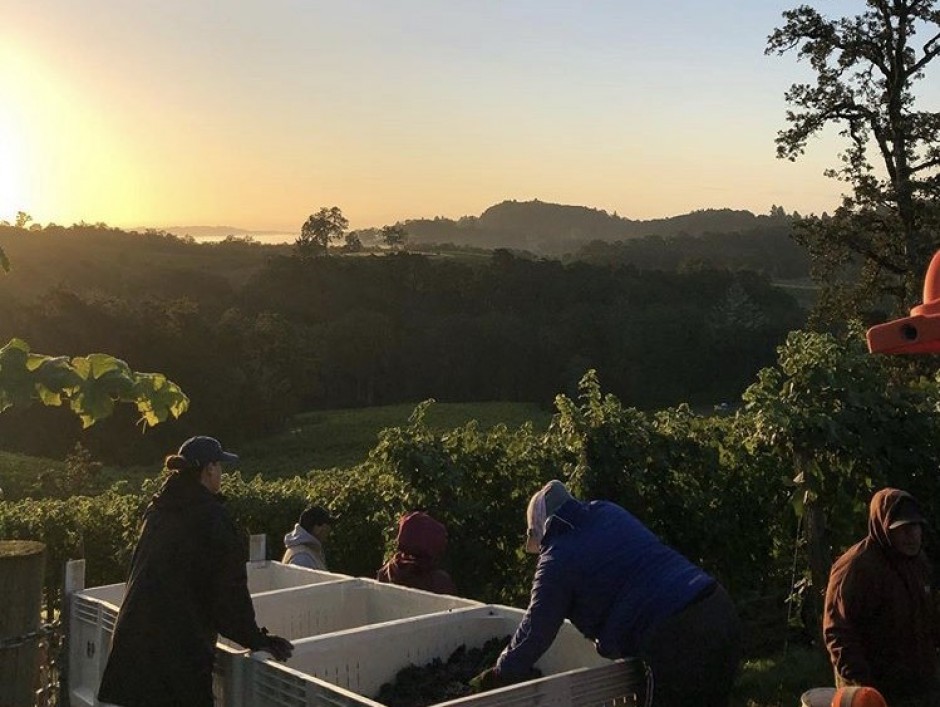 [photo by Résonance Wines at harvest in the Willamette Valley, Oregon]

Oregon is recognised as a global icon for high quality wine, however, this reputation has been built only over the last five decades. Settlers planted grapes as early as the 1840s and we know that Oregonian's were producing wine pre-Prohibition, but it was not until the late 1970s that Oregon’s wine began achieving critical notice.

The state of Oregon is situated in the Pacific Northwest region on the West Coast of the United States. Oregon has a varied climate, however by virtue of its coastal marine influences, the region generally benefits from cool and cloudy conditions, with dry summer months and mild, wet winters.

Oregon has historically been a magnet for a thriving agricultural industry owing to its lush fertile land and temperate climate (ideal for a diverse production of crops). These qualities also placed Oregon as a model environment for the cultivation of grape vines, and what started as a hobby and farming practice went on to spark global demand. It was soon realised that Oregon was made for Pinot Noir. Notoriously difficult to grow, these delicate Pinot Noir grapes have a preference for cooler climes and Oregon’s proximity to coastal air provides an ideal growing season and climate to produce Pinot Noir. So much so that this varietal defines Oregon wine for so many wine lovers.

Oregon has developed a long-standing relationship of mutual assistance with Burgundy. Acknowledging the similarities in climate and terroir, Oregon's wines have long had a winemaking influence from their old-world Burgundian counterparts. Nevertheless, Oregon has established themselves as a distinct wine-making region, moving out of Burgundy's shadows with a breadth of grape varietals. They are building a bridge between the past and the future and the results are world-class wines which now stand alone.

The most well-known wine-making region in Oregon is the Willamette Valley; now more synonymous with wine than its geographical location. The Willamette Valley spans 150 miles North to South of Oregon. Pinot Noir vines were first introduced in the Willamette Valley in the 1960s by David Lett, founder and winemaker for The Eyrie Vineyards. It was in 1979 that Oregon shocked the global wine industry and firmly made its mark on the global wine map at the Gault-Millau French Wine Olympiades as Eyrie Vineyards' 1975 South Block Pinot Noir was placed in the top ten wines and pinched the top place for a Pinot Noir, out placing their French contemporaries.

Today, Oregon is a special winemaking region where wines are a true reflection of their locality with a strong sense of place and people. Oregon's modern winemakers are crafting wines with passion and clear intention, bringing an energy to the industry and a refreshing collaborative culture in their mission to making incredible wine.